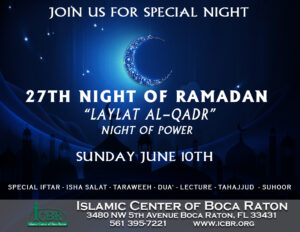 Join us for special night at Islamic Center of Boca Raton

(The Virtue of Laylatul-Qader (Night of Power or Decree)

Laylat-ul-Qadr is an honorable night which Allah gave great characteristics to show its virtue and status, of which:

The revelation of the Qur’an therein is a proof to its status and virtue where Allah, the Glorious, revealed therein the greatest type of Dhikr and the most honorable book. By reciting the Qur’an, you shall gain one of the greatest reasons of guidance and piety.

2- Allah (may He be Exalted) described it as a blessed night by his saying: “We sent it (this Qur’ân) down on a blessed night [(i.e. the night of Al-Qadr, Sûrah No. 97) in the month of Ramadân – the 9th month of the Islâmic calendar]. Verily, We are ever warning [mankind that Our Torment will reach those who disbelieve in Our Oneness of Lordship and in Our Oneness of worship].” [Surat Ad-Dukhan: 3]. So, it is blessed because of its abundant goodness, great virtue, and the great rewards which Allah gives to those who perform Qiyam (Voluntary Night Salah) out of faith and hoping for Allah’s Reward.

3- Allah (may He be Exalted) mentioned in His Book: “Therein (that night) is decreed every matter of ordainments.” [Surat Ad-Dukhan: 4]. i.e., Precise commands relating to the livings of people and their deaths are separated from Al Lawh-ul-Mahfuzh (the Preserved Tablet) to the sheets of angels —who record all matters of people, such as: sustenance, actions, events, and ages— up to the next year by Allah’s Knowledge, Wisdom, and Ability; and that indicates the status of that night.

If the rewards of good actions are doubled in Ramadan, how about performing these actions in Laylat-ul-Qadr?! None but Allah knows the reward that is given to the person who performs Qiyam in that night out of faith and hoping for the reward of Allah.

5- Angels come down to the earth with goodness, blessing, and mercy for the believers. Allah (may He be Exalted) says: “Therein descend the angels and the Rûh [Jibrîl (Gabriel)] by Allâh’s Permission with all Decrees. * (All that night), there is Peace (and Goodness from Allâh to His believing slaves) until the appearance of dawn.” [Surat Al Qadr: 4 – 5].

6- The Hadith that was authentically reported in Sahih Al Bukhari and Sahih Muslim from the Prophet (peace be upon him) that he said: “Whoever establishes Salah on the night of Qadr out of sincere faith and hoping for a reward from Allah, all his previous sins will be forgiven.” Proves that it is a night in which sins are forgiven, gates of goodness are opened, rewards are multiplied, and matters are facilitated.

For these great virtues and others, authentic Hadiths were reported from the Prophet (peace be upon him) to exhort people to seek that night in the last ten days of Ramadan, show its virtues, and explain the Sunnah of (peace be upon him) in performing Qiyam during that night as well as the practice of his Companions (may Allah be pleased with them) in exerting efforts to seek it.

All these narrations incite the determinations of those who seek the Hereafter, forgiveness of their sins, and reward to follow their example righteously in order to gain the pleasure of the Most Gracious and win His Vast Paradise.

Al Hafizh said in Fathul-Bary: The most correct view is: It is in the odd nights of the last ten days of Ramadan and it is moving from one year to another.

I said: Of the matters which scholars decided about that night is: It is to be sought in the even nights as well as the odd nights. Therefore, it was reported in some Hadiths and some narrations reported from the Pious Predecessors that it came in the even nights of the last ten days.

The Shaykh of Islam, Ibn Taymiyah, (may Allah bestow mercy on his soul) said: “If the month is complete, each night of the last ten is an odd night: either because it is odd according to its order in the month as 21st or as being the odd of the next night such as 22nd. However, if the month is incomplete, odd nights will be according to the next nights only. (The meaning is: the last ten days start in 20thnight and that makes it the first night of the ten which means night 1, then 21st will be night 2 and so and that means each night is an odd night).”

Therefore, a believer should seek it in the whole ten nights of Ramadan in accordance to the Prophet’s saying: “Seek Laylat-ul-Qadr during the last ten days of Ramadan.”  [Reported by Al Bukhari and Muslim].

Allah concealed that night from His Servants out of mercy so that they would increase their acts of worship and gain the great reward by performing Qiyam during these blessed nights, thinking that each night is Laylat-ul-Qadr.

By this, they shall gain the reward of each night, especially when they think it Laylat-ul-Qadr and actions are judged according to intentions, in addition to catching up Laylat-ul-Qadr if they perform Qiyam the entire ten days.

Therefore, it was the Sunnah of the Messenger of Allah to observe `Itikaf during the last ten days and exerting efforts in worship. So, he secluded from people during those ten, engaging himself in obeying Allah, mentioning Him, forgetting anything that might distract him, and focusing on pleasing Allah by worship.

In fact, `Itikaf is a transmitted Sunnah and a great rite that is almost abandoned by many people, so it is a Sunnah to revive it and exhort people to do it. “Whosoever introduces a good practice in Islam shall have its reward and the reward of those who act according to it without anything being diminished from their rewards. And whosoever introduces an evil practice in Islam shall shoulder its sin and the sins of all those who will act according to it without diminishing in any way their burden.”  [Reported by Muslim].

The Messenger of Allah (peace be upon him) said: “Whoever guides someone to virtue will be rewarded equivalent to him who practices that good action.”  [Reported by Muslim].

All people who are capable of waking up for Salah and Dhikr should do so to gain the great reward and benefit of these blessed nights in drawing near to Allah because they are opportunities that should be seized.

Of the things which cause worry and sadness is that some people show negligence to these ten days and their reward by showing laziness more than other days and nights of Ramadan to the extent that they do not perform obligatory Salah, abandon Masjid, get crowded in markets.

We ask Allah’s Forgiveness and good health to them and us in the world as well as in the Hereafter. We ask Him to make us from those who hasten to repentance and paradises, and compete with one another in doing good deeds in order to win the highest rewards and the great ranks of Paradises, for He is All Hearing, All Responding to invocations.