This Friday 10/31/2014 you are invited to learn in a day full of knowledge with Dr. Mohammad Yunus.

Dr. Yunus will be delivering the Friday khutba and will have a lecture between Maghrib & Ishaa inshaa Allah. 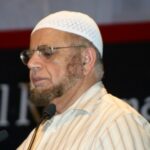 Dr. Mohammad Yunus served as President of ICNA for 17 years during 1977 – 2000. He is a member of the ICNA Central Majlis ash-Shura (Consultative Council) and has been a member of ICNA’s General Assembly since 1971. He is a successful cardiologist and Clinical Assistant Professor of Medicine at Florida State University, College of Medicine. He is also a scholar of Islam and the Imam/Director at Masjid Dawah in Bonifay, FL. Dr. Yunus has eight children and 25 grandchildren—his son Tayyab Yunus is the former National Coordinator of Young Muslims, ICNA’s youth division, and his daughter Saadia Yunus is Assistant Editor of ICNA’s Message International Magazine.