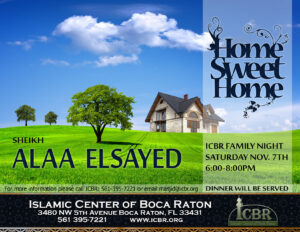 The Islamic Center of Boca Raton is pleased to invite you, your friends and families to our family night on Saturday Nov. 7th between Maghrib and Isaa.

Also The sheikh will be the khateeb for Friday Nov. 6th inshaa Allah.

Dinner will be served.

Sheikh Alaa was born in Cairo and lived in Egypt until he was 15 years old. During his youth, he spent his time as the goalie for the Junior National Team and moved to Toronto, Canada, in the late 1970’s.

Sheikh Alaa worked as a Vice-President of Business Development for an international company, and during this time he competed and placed first in the 1992 Bermuda Triathlon.

Sheikh Alaa has studied for his Bachelors in Sharīʿah from the American International University, and has earned a scholarship from the Shari’ah Academy in Egypt/Florida. Sheikh Alaa has also received his ijāzah of Qurʾan recitation for Ḥafṣ ʿan ʿĀṣim, studied comparative religion for five years through the IPCI in South Africa, and was on the board of directors of the World Assembly of Muslim Youth.

Sheikh Alaa currently lives in GTA (Greater Toronto Area) with his wife and three children. He is a member of the Canadian Council of Imams as well as a member of Horizon Interfaith Communication Media Council. Prior to this he was an Imam for the Muslim Council of Calgary and acted as its media spokesperson. He has hosted Vision of Islam, a weekly television show which runs throughout Alberta, Canada. He also appeared as a speaker on Islam on various television channels.

Currently Sheikh Alaa is the Director of Religious Affairs for the Islamic Centre of Canada-ISNA. Prior to that, he was the Executive Director for the Canadian Islamic Congress. Sheikh Alaa is a favourite tutor with AlKauthar and works closely with Mercy Mission’s projects worldwide.