Virtues of the month of Dhul Hijjah 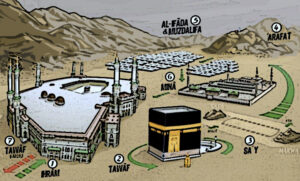 The blessed days of Hajj are now upon us. Referring to the first ten days of Dhu al-Hijjah, Prophet Muhammad (pbuh) said, “There are no days in which good works are more beloved to Allah than these days.”
This season of worship brings many benefits, such as the opportunity to correct one’s faults and make up for any shortcomings or anything that one might have missed.
Do not allow these blessed days to pass without reaping the benefits of these rewards. Please read the following article on the virtues of these days.

Virtues of the First Ten Days of Thul-Hijjah

Praise be to Allah Who has created Time and has made some times better than others, some months and days and nights better than others, when rewards are multiplied many times, as a mercy towards His slaves. This encourages them to do more righteous deeds and makes them more eager to worship Him, so that the Muslim renews his efforts togain a greater share of reward, prepare himself for death and supply himself inreadiness for the Day of Judgment.
Among the special seasons of worship are the first ten days of Dhu’l-Hijjah, which Allaah has preferred over all the other days of the year. The Qur’an and Sunnah repeatedly mention the benefits and virtues of the first ten days of Thul-Hijjah, such as what Allah had said, what translated means, [By the Dawn. By the ten nights.] [89:1-2]. Ibn Kathir said that according to Ibn Abbas, Ibn Az-Zubayr and Mujahid, these ten nights mentioned in the Ayah are the ten nights of Thul-Hijjah. Also, Allah said, [And mention the Name of Allah on appointed Days.] [22:28], and, as Ibn Abbas has stated, “They are the (first) ten (days of Thul-Hijjah).” Furthermore, Ibn Abbas narrated that the Messenger of Allah has said, what translated means, “There are no days during which working the good deeds is more preferred in the Sight of Allah better than these (first ten) days (of Thul-’Hijjah).” The companions asked, “O Messenger of Allah! Not even Jihad in the Cause of Allah?” The Prophet responded, “Not even Jihad in the Cause of Allah, except for a man who departed (to the battlefield) and took along his money, and did not return with any of these (he died as a martyr and lost his money during Jihad).” [Al-Bukhari].

Some Acts of Worship During Thul-Hijjah

1- Prayer: Prayer is one of the best deeds that one can perform forthe Sake of Allah. This good deed entails going early to the Masjid to wait for the prayer and also frequently offering voluntary prayers. The Messenger of Allah, Salla Allahu Alayhi Wasallam, said, what translated means “Repeat Sujud (prostrating in prayer) frequently, for whenever you perform even one Sujdah for Allah, Allah will raise you to a higher degree and erase a sin from you(r) (record).” Muslims can benefit from this great reward for praying and Sujud all year round, especially during the first ten days and nights of Thul-Hijjah.
2- Fasting: Voluntary fasting is a righteous, good deed that one can perform most of the year, including the first ten days of Thul-Hijjah. One of the wives of the Messenger of Allah said, “The Messenger of Allah used to fast the (first) nine (days) of Thul- Hijjah, (the day of) ‘Ashuraa’ (the tenth day of the first lunar month, Mu’harram) and three days in each month.” Imam An-Nawawi said that voluntary fasting during these ten days is strongly recommended.
3- Performing Hajj and ‘Umrah: One of the best deeds that one can do during these ten days is to perform Hajj to the Sacred House of Allaah. The one whom Allaah helps to go on Hajj to His House and to perform all the rituals properly is included in the words of the Prophet (peace and blessings of Allaah be upon him): “An accepted Hajj brings no less a reward than Paradise.”
4- Takbir Tahlil and Ta’hmid: Ibn Umar narrated that the Messenger of Allah said, what translated means, “There are no days when performing good deeds is better in the Sight of Allah than these ten days. Therefore, during them (these ten days and nights), always repeat Tahlil, Takbir and Ta’hmid.” [Ahmad]. Tahlil is attesting that there is no deity worthy of worship except Allah by saying, “La Ilaha Illa- Llah.” Takbir is to say, “Allahu Akbar,” which means “Allah is the Great.” Ta’hmid is to thank Allah always by saying, “Al-’Hamdu Lillah.”. The following Takbir was reported by the companions and the second generation of Islam, “Allahu Akbar, Allahu Akbar, La Ilaha Illa- Llah, Wa-Allahu Akbar, Allahu Akbar, Wallillahi Al-’Hamd (all thanks are to Allah).” Al-Bukhari said, “Umar used to recite Takbir in a tent in (the sacred area of) Mina (near Makkah). When people present in the Masjid would hear him, they would say Takbir, along with those in the marketplace, until Mina is shaken with Takbir. It is preferred that men raise their voices with Takbir.
5- Doing more good deeds in general: Because good deeds are beloved by Allaah and will bring a great reward from Him. Whoever is not able to go to Hajj should occupy himself at this blessed time by worshipping Allaah, praying (salaat), reading Qur’an, remembering Allaah, making supplication (du’aa’), giving charity, honouring his parents, upholding the ties of kinship, enjoining what is good and forbidding what is evil, and other good deeds and acts of worship.
6- Sacrifice: One of the good deeds that will bring a person closer to Allaah during these ten days is offering a sacrifice, by choosing a high-quality animal and fattening it, spending money for the sake of Allaah.
7- Sincere repentance: One of the most important things to do during these ten days is to repent sincerely to Allah and to give up all kinds of disobedience and sin. Repentance means coming back to Allah and foregoing all the deeds, open and secret, that He dislikes, out of regret for what has passed, giving it up immediately and being determined never to return to it, but to adhere firmly to the Truth by doing what Allah loves.

Fasting During the Day of ‘Arafah

The Virtues of the Day of An- Na’hr

The day of An-Na’hr, the Day of Sacrifice, which falls on the tenth day of Thul-Hijjah, is one of the two major feasts of Islam; the other being Eid Al-Fitr, which comes after the end of the fast during the month of Ramadhan. Some scholars of Islam even stated that the Day of Sacrifice is the best day of the year, even betterthan ‘Arafah. Yet, many Muslims are unaware of this blessed day and, therefore, are unaware of the reward for celebrating it by performing Eid prayer, the sacrifice, etc.

What must the Muslim avoid during these ten days if he wants to offer a sacrifice?

Those who are able and intend to offer the sacrifice on the tenth day of Thul-Hijjah must refrain from having a hair cut or clipping their nails, for the Messenger of Allah disallowed this. Umm Salamah said, “The Messenger of Allah said, ‘When the ten (days) start and one of you intends to offer Al-Udh’hiyah (an animal reserved for sacrifice), he has to abstain from having a hair cut or clipping his nails, until he has offered his sacrifice.’” [Muslim].
There is much to be gained, so make the most of the opportunity afforded by these invaluable and irreplaceable ten days. Hasten to do good works, before death strikes, before one can regret one’s negligence and failure to act, before one is asked to return to a place where no prayers will be answered, before death intervenes between the hopeful one and the things he hopes for, before you are trapped with your deeds in the grave.
O you whose hard heart is as dark as the night, is it not time that your heart was filled with light and became soft? Expose yourself to the gentle breeze of your Lord’s mercy during these ten days, for Allah will cause this breeze to touch whomever He wills, and whoever is touched by it will be happy on the Day of Judgment. We ask Allah to bless us with working all types of righteous, good deeds during this sacred season. May Allah bless our Prophet Muhammad and all his Family and Companions.